Liyawaday is the third wife of Djambawa Marawili. She lives with him at his homeland of Yilpara where she has assisted him with most of his major works over the last ten years. She also helps with her mother, Galuma Maymuru, and her father, Dhukal Wirrpanda's work.

It is often her role to complete the fine cross hatching or marwat with a fine brush made of a few human hairs. She has worked for her father, mother and husband. She is heavily involved in her husband's many duties.

She has consistently produced work in her own right drawing on her own Dhudi Djapu clan designs which her father has shared with her.

Liyawaday is the granddaughter of the famous artist Narritjin Maymuru. Her first exhibition was at Annandale in 2009 and marked her coming of age as an artist. It was at her husband's insistence that she stepped out from his shadow. She was an active participant with the Djalkiri project with some of Australia's best known mainstream artists at Yilparar in 2010. After almost two decades of art production her status as an independent artist in her own right is confirmed by the show at Annandale
in 2011. 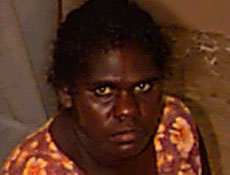